It is never to late, or to early to follow your dream! "..Day or night? After 5 days of midnight sun adventure, we kind of didn’t think about time anymore. We explored at all hours!.." 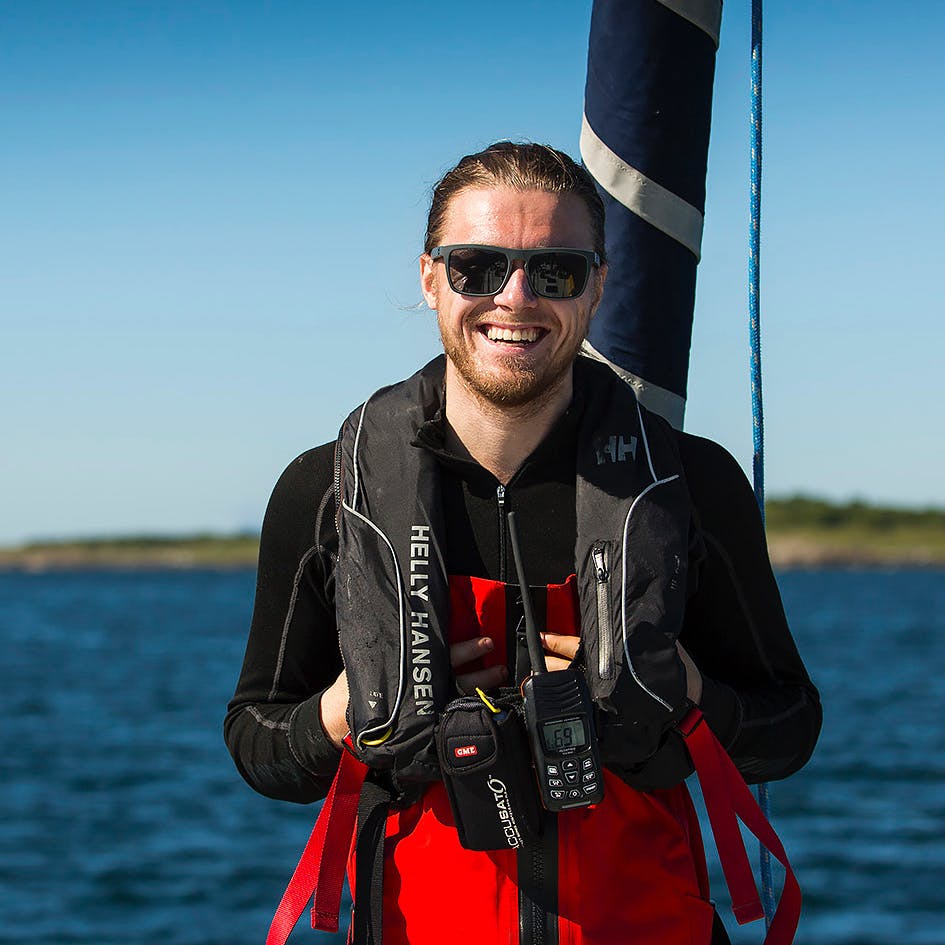 Skipper Mats have sailed a lot over the last years, almost every day, this is his story from his first trip as expedition leader circumnavigation Svalbard / Spitsbergen.

- I have never had to think about ice forecasts or arming myself with a rifle on land. It was also, 6 months before this expedition that I had become a professional skipper for SailNorway where I began taking groups out on adventures along coastal Norway and teaching them the art of sailing.

Taking on the role of expedition leader challenged me more than ever as a sailor, an adventurer, and as a person. August 1st saw the start of a journey to becoming the youngest expedition leader to take on the circumnavigation of Spitsbergen. Joined by two experienced co-skippers from SailNorway and a nine person crew from around the world in Longyearbyen.
The route took us up to the North Pole ice and back south again, through the Hinlopen Strait (Hinnlopenstretet). And all this from our 50ft sailboat called Humla.

The day was finally here and, to be honest, I was a little nervous. Had I remembered everything on the to-do-list as a skipper? Enough diesel? Water? Food? One thing was sure, running dry on important essentials during this 10-day, wild-nature expedition was not an option. We were fully geared to go.

The crew: from Sweden, Norway, The Netherlands, Scotland and the US.

We started sailing out from Longyearbyen on the evening of August 1st. With a total 863 nautical miles to cover, we sailed 72 miles through the first midsummer night from Longyearbyen to Polepynten. Awaiting us that morning, a lazy gang of unstressed walruses.

The goal for all guests was to become active crew and handle the boat, without the skipper telling them what to do.

We made it to Ny-Ålesund for a post lunch stop with beautiful weather, a coal train, and totally epic mountain backdrop.

No wind and a dead calm sea, skipper Morten enjoyed time off a hammock, amazed by the surroundings.

Always interesting to moor on ice and inviting crew onto a floating ice flake was not without risk. I was first out checking conditions.

Leaving the ice flakes of Kongsfjorden, we continued our journey to the north west side of Spitsbergen. Probably the coolest and weirdest thing about sailing so far north in summer is that it never gets dark. Fishing cod at 4am was no problem and the girls made sure food got to the table.

He might look small in the water, but damn that’s a big bear up on land. Amazing to see the king of the arctic.

After watching the polar bear from a safe distance, we landed at Virgohamna. Few places in the world have more visible traces of competitive expeditions to the North Pole.

Finally, with enough wind to set sail, we headed to the north side of Spitsbergen, closing in on Velkomstpynten. Niklas steered steady, cruising up to 8 knots and we paid close attention. Drift ice from the North Pole was now a possibility.

We met no ice and only smiles as we sailed butterfly downwind towards Mushamna.

Arriving at the small and protected Mushamna bay, we were greeted by a fin whale chasing food. A spectacular view!

After watching the whale we went onshore and shared a campfire, good times all round.

Starting with a blue sky and landing on an old hunter cabin in Mushamna. Lucky for us, we met a hunter couple, met the dogs and had a look inside.

Is it? No way, it cannot be!
The mighty blue whale, the biggest ocean animal to have existed on earth. Reaching 30 meters in length and 200 tons in weight, we certainly did not want to bump into it.

"Our position was now 80’00.0N and we popped a bottle of champagne. We were pretty stoked -Finally, a goal was reached! " MATS

Just an hour later, we encountered a powerful view, The North Pole Ice.
It is hard to describe how special it was sailing along the ice and knowing that the next stop was the North Pole.

"Our own ice flake and drinking champagne, if you ask me, it should be on everyone's bucket list." MATS

We found the perfect iceberg and popped another bottle of champagne, celebrating life.

First, find yourself on an iceberg close to the North Pole, then dive in from it. I was literally ice cold!

And now the moment of truth: would we make it around the northernmost point of Spitsbergen in a plastic boat? Well yes, the ice forecast was on point and we made it through open drift ice. What a day!

The Hinlopen Strait is about 90 nautical miles long runs between Spitsbergen and Nordaustlandet. On the east side of Spitsbergen, we passed a bird mountain called Alkefjellet. I have never seen so many birds in one place.

Pretty amazing to see them fly with so much control and totally insane no crashing.

We continued our journey south towards Torellneset, home to the biggest walrus colony on Svalbard.

They might look lazy on land, but in the water, they are pretty fast and sneaky.

Sailing alongside the Bråsvellglazier, the biggest glacier on Svalbard. A spectacular view!

Nature makes us so small, sometimes. This position on the map actually showed we were on land. It is something else to see ice melt right in front of your face.

Day or night? After 5 days of midnight sun adventure, we kind of didn’t think about time anymore. We explored at all hours!

We used the night crossing over from Bråsvellglazier to Barentsøya, navigating through drift ice from the big glacier. On one ice flake, this seal looked so relaxed.

Making breakfast and our third polar bear sighting at 8:00 am. Then we watched this guy relax…from a safe distance, of course!

It was pretty strange seeing a polar bear eat grass for breakfast.

After breakfast and polar bear watching for hours, we went onshore to hike and make a huge campfire. It felt pretty raw and wild walking onshore with rifle.

Before heading further south and still on the east side of Spitsbergen, we went back to the polar bear spot to find 2 more walking around. Just one here!

Five polar bears so far and little did we know that we would see more. The crew woke me to notify of another bear on land. Tired as fuck, I jump out of bed and grab the camera. I captured the moment, a polar bear standing up on its back legs curious to watch another one relaxing by the water’s edge.

Asleep, or only resting?

Then suddenly; run boy run!
Watching bears chasing each other is now one of my greatest wild nature experiences.

After a while, the young male polar bear was able to feed. For the rest of the day, we tacked south in the fog, not seeing a thing.

DAY 8 – THE SOUTHERNMOST POINT OF SPITSBERGEN

Foggy at the start of Day 8, the wind calmed down and the engine was turned on. Suddenly, the fog lifted and revealed blue skies as we sailed towards beautiful Hornsund.

Dropping anchor, we were ready to hike into a truly amazing day with totally unreal views! Glaciers and mountains surrounded us. I can’t wait to get back here and ski.

We ended the day with one last camp fire and grilled fresh cod. A perfect day with stunning views!

It is never too late, or early, to go for your dream!

The oldest crew member was 68 years and I was the youngest at 22 years old. This showed me that it is never too late, or early, to go for your dream! We sailed 863 nautical miles in 10 days. After arriving in Longyearbyen, I became the youngest expedition leader to circumnavigate Spitsbergen. One of my biggest dreams had come true and I had fallen even more in love with Svalbard and its wild nature. If you want to experience this too, then come join us on this Arctic journey this year!